May 28, 2020
There's something you should know about me.  I absolutely dread doing home improvement projects.
The scope of the task in question doesn't make any difference.  Even something as simple as hanging up a picture frame fills me with trepidation and angst.
It's not that I'm lazy, or unwilling to do the work.  One major problem is that these simple jobs never, ever turn out quite so simple as I'd hoped.  Before I discovered toggle bolts, I mangled several spots in our walls.  But then I became enlightened in the ways of properly hanging objects on plaster and lath walls.
So I proceeded with confidence to the next project, now equipped with the correct tools.  But the hole I drilled wasn't big enough to insert the folded wings, so I had to keep widening it.  And since I didn't have a large enough drill bit, and didn't want to spend another hour going to the hardware store, this involved wiggling the drill around in a circular motion and hoping for the best.  Pretty soon, I had created at an enormous hole (and a pile of dust on the floor), but at least I could insert the toggle bolt and it basically worked.  Still, this outcome seemed ridiculous and intolerable, so I posted a question about my technique on the internet, and several strangers assured me it was fine.  Someone even recommended the ultimate version of the toggle bolt: the Snaptoggle.
When the time came to hang something heavy in the kids' room, above their bed, I felt certain the Snaptoggle would carry me through.  No more giant holes.  No more having to delicately balance the screw so that it wouldn't fall through into the space inside the wall, or having to run to the bathroom for tweezers when it inevitably started to.  Sure enough, the Snaptoggle worked like a champ.  And yet, as I stood back to admire my work, it became obvious that the damn thing was crooked!
It turns out that it's difficult to hang something evenly on a wall.  Even if you're careful, and measure twice, and use a level.  You know, the tool that is literally named for that express purpose?  Sometimes, the attachments that the bolts slide into have a lot of play, and other times they don't.  But worse than that, if you live in an old, slightly crooked house, then you have to decide what your definition of "level" is!  Does level mean parallel to the ground, or parallel to the straight piece of furniture that is sitting on a slightly uneven floor.
This is another major reason I hate doing these projects.  There doesn't seem to be any predictability, and past experience hardly seems to help in future attempts because the situation you face can be surprisingly different.  Katie says that this flummoxes me so much because of the way my brain works, but that's also what makes me good at my day job of programming computers.  Computers are very predictable, unlike walls in 100 year old houses.
Speaking of Katie, please allow me to present my beautiful, amazing wife of seven years. 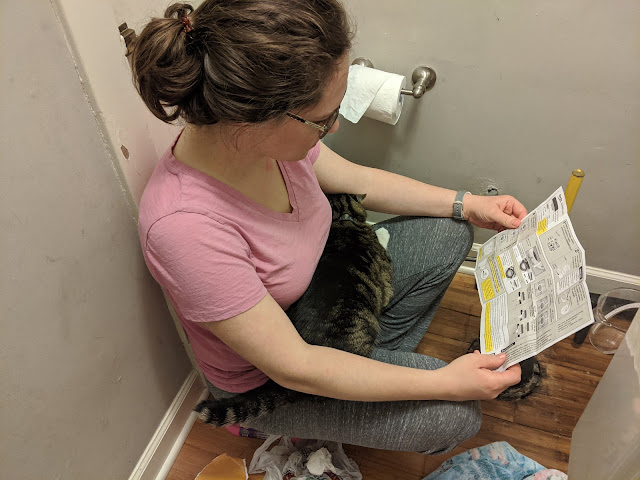 Those who know her will agree that she has many wonderful qualities.  But I doubt many people know how effortlessly and fearlessly she approaches challenges like this.
Here, she is reading the instructions on the new waxless toilet ring we had just purchased.  And yes, Marco also decided it was an appropriate time for some forced cuddles.
A few hours before this photo was taken, she decided - after simpler attempts to fix a clog had failed - to pull the toilet up.  This would allow for some more direct approaches, since by this point it was clear the problem was in the pipe underneath the floor.  Much to my chagrin, this also involved also breaking the silicone caulk seal around the toilet base.  That didn't bother her in the least bit, though.  She always says things like, "what's the worst that will happen?" or "let's just try it".  I'm sure that if I had verbalized this specific objection, rather than just pacing around looking anxious, she would have responded by pointing out we owned a caulk gun and more silicone to replace it, if need be.
Over the course of the afternoon, we tried every technique to attack the problem known to Google, from plungers, to augers, to shop vacs, to chemicals.  At one point, I accidentally turned the shop vac on in "blow" mode instead of "suck" mode.  The net result was water spraying all over the room, but mostly on Katie and her clothes.  Even though she went from surprised to pissed off in the space of a few seconds, she laughed it off a minute later.
In the end, it seemed like we had made some progress, but it was time to reset the toilet.  Even though the problem we set out to address wasn't 100% fixed, Katie didn't despair.  She welcomes a challenge and enjoys the process of experimenting to see how things work.
There are many different criteria for what qualifies as a "successful" marriage.  Katie and I are compatible.  We have a similar sense of humor.  We have our inside jokes that are only funny to each other, and a shorthand that nobody else could hope to decipher.  As long as we're together, we can be happy whether we're watching old ER episodes, dining at a nice restaurant, or marveling at the behavior of our children.  We enjoy being with each other in ways that ought not be detailed here.
But there is one common nugget you will find across all the blog posts, Tweets, and podcasts ever produced on the subject of life partnerships: your partner should be someone who helps you grow as a person.  Ideally, they should help you become the best version of yourself.  I don't think I truly understood this until recently.
When I stop to honestly consider how I've changed over the years, it's undeniable that I am better at doing these kinds of projects.  No, you probably won't ever see one of those Reddit posts from me humbly showcasing a professional looking DIY full room remodel, done over a weekend and on a budget.  But be assured that the next coat rack or picture frame I hang up will be done with a little less gloom (and inaudible mumbling) than the last.  And if I break more of the wall than a professional handyman would need to, I won't feel like I've failed.  I have her to thank for that.
Happy anniversary to Katie, the love of my life.  I'm looking forward to continuing our journey together and improving myself along the way.
Now, can we please call a damn plumber?

Popular posts from this blog

September 14, 2021
Don't Trust the Process Prelude The first thing I did, after signing the offer letter, was to uninstall the Blind app from my phone. My brain needed a long break from that one. The anonymous commentary from tech employees is valuable, but I don't love the picture it paints of us. Next, I cancelled all the five-hour-long "virtual onsite" interviews I had scheduled for early January and closed my in-progress homework assignments. The feeling of liberation from this was palpable. I had finally landed a new job, one that I was very excited about. More on that later. For now, let's delve into the months of misery leading up to it. As is tradition in my field, allow me to lay out a statement of scope. Not in Scope A solution to these problems. If you're someone who thinks that nobody can present complaints without bundling them with a neatly packaged solution, you should probably turn back now. Any treatment of those coming from less advantage
Post a Comment
Read more

Timeline of a Baltimore Snowstorm

March 07, 2013
Friday, 2:50PM : In spite of its name, AccuWeather.com publishes a story about an upcoming blizzard, which would hit the mid-Atlantic region sometime early next week. The writer draws parallels to the historic Ash Wednesday Storm of 1962, which killed 400 and caused $200 million in non-inflation-adjusted damage. At Constellation Energy headquarters, BGE executives leave work early to avoid the preemptive angry calls that start flooding in. Friday, 3:17PM : The last roll of toilet paper on store shelves within a 35 mile radius of Baltimore is purchased from Giant in Towson. Saturday : Some anonymous jerk on the internet (probably from D.C.) coins the term "Snowquester." National media sources seize upon this and a Twitter frenzy ensues, to the chagrin of everyone. In response, local redditors suggest the term "Bohquester" as an alternative even though that term has absolutely nothing to do with weather. Sunday : Local evening news leads with reporters c
Post a Comment
Read more