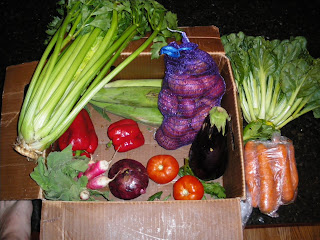 The tatsoi was new to me, but tasted great raw. The carrots tended to be stubby but flavorful. At this point I started donating all my potatoes to my coworker Anand (there will be many more to come). 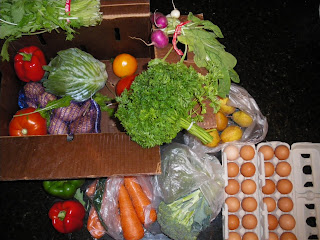 The eggs continue to impress, and parsley goes well with them. Heirloom tomatoes are weird but kinda tasty nonetheless. 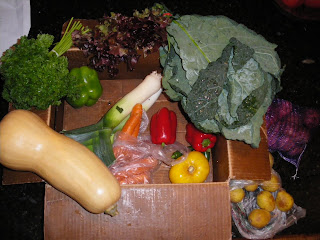 The greens were good but a surprise (haven't got that many in a while, but it was no challenge to finish them all). I ended up cooking the squash with a pot roast - probably wasn't the best way to prepare it but it turned out OK. 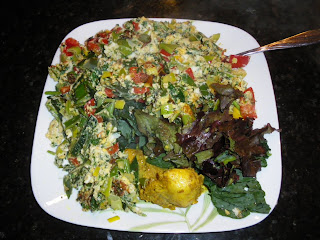 This was a Jeff-style omelet served over this week's green's and a curry chicken tender from Trader Joe's. What you can't see is the pool of coconut milk underneath everything. Mmmmmmm. 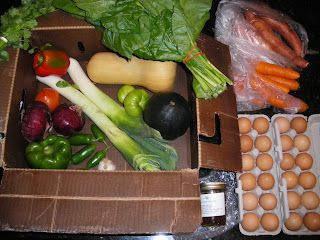 Phew, what a box! Saving the jelly for later, when I figure out something to do with it. With eggs, peppers, and onions it became sort of an omelet week, which isn't a bad thing. The mustard greens were OK as salad, not quite my favorite. 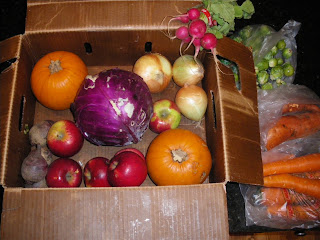 The first apples, and they're great. I gave the pumpkins to my mom since I had little interest in them. Brussels sprouts are in a tie for first place as my favorite vegetable so this week was all good. 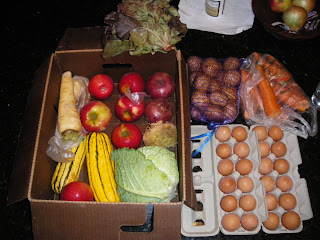 This was the last week. =( The newsletter wasn't available, so I couldn't tell what the green cabbage-like thing was. It was pretty good in salad though. Also, I wasn't sure what to do with the celeriac so unfortunately it ended up going bad. The squash is yet-to-be-consumed but I have a feeling it will end up being quite tasty, knowing the person who will be helping me prepare it.

This marks the end of my summer Wisconsin CSA. In the end, it was well worth the money. However, as in my previous experience, it was a bit much for one man to consume, particularly in those weeks with lots of greens or unusual items.

Now I'm signed up for a meat CSA through Liberty Family Farm in Michigan. I'll post some updates as that progresses. So far, it's great. More to come on that.

Popular posts from this blog

September 14, 2021
Don't Trust the Process Prelude The first thing I did, after signing the offer letter, was to uninstall the Blind app from my phone. My brain needed a long break from that one. The anonymous commentary from tech employees is valuable, but I don't love the picture it paints of us. Next, I cancelled all the five-hour-long "virtual onsite" interviews I had scheduled for early January and closed my in-progress homework assignments. The feeling of liberation from this was palpable. I had finally landed a new job, one that I was very excited about. More on that later. For now, let's delve into the months of misery leading up to it. As is tradition in my field, allow me to lay out a statement of scope. Not in Scope A solution to these problems. If you're someone who thinks that nobody can present complaints without bundling them with a neatly packaged solution, you should probably turn back now. Any treatment of those coming from less advantage
Post a Comment
Read more

Timeline of a Baltimore Snowstorm

March 07, 2013
Friday, 2:50PM : In spite of its name, AccuWeather.com publishes a story about an upcoming blizzard, which would hit the mid-Atlantic region sometime early next week. The writer draws parallels to the historic Ash Wednesday Storm of 1962, which killed 400 and caused $200 million in non-inflation-adjusted damage. At Constellation Energy headquarters, BGE executives leave work early to avoid the preemptive angry calls that start flooding in. Friday, 3:17PM : The last roll of toilet paper on store shelves within a 35 mile radius of Baltimore is purchased from Giant in Towson. Saturday : Some anonymous jerk on the internet (probably from D.C.) coins the term "Snowquester." National media sources seize upon this and a Twitter frenzy ensues, to the chagrin of everyone. In response, local redditors suggest the term "Bohquester" as an alternative even though that term has absolutely nothing to do with weather. Sunday : Local evening news leads with reporters c
Post a Comment
Read more

May 28, 2020
There's something you should know about me.  I absolutely dread doing home improvement projects. The scope of the task in question doesn't make any difference.  Even something as simple as hanging up a picture frame fills me with trepidation and angst. It's not that I'm lazy, or unwilling to do the work.  One major problem is that these simple jobs never, ever turn out quite so simple as I'd hoped.  Before I discovered toggle bolts, I mangled several spots in our walls.  But then I became enlightened in the ways of properly hanging objects on plaster and lath walls. So I proceeded with confidence to the next project, now equipped with the correct tools.  But the hole I drilled wasn't big enough to insert the folded wings, so I had to keep widening it.  And since I didn't have a large enough drill bit, and didn't want to spend another hour going to the hardware store, this involved wiggling the drill around in a circular motion and hoping for the best.
Post a Comment
Read more